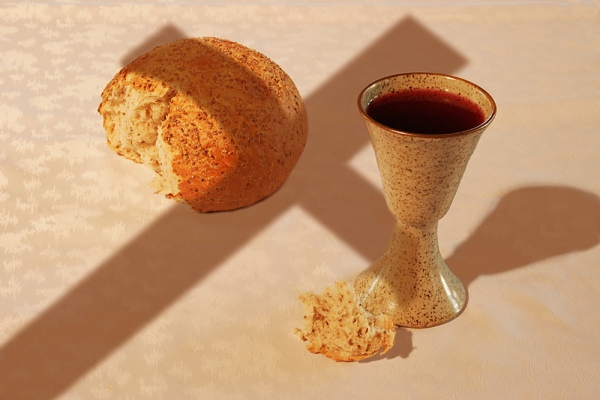 Last time, we looked at the covenant with David. Today, we look at the new covenant, the final stage and consummation of the covenant of grace.

Six hundred years later, a Jewish rabbi would claim to put this new covenant into effect. In the Gospel of Matthew we see Jesus and his disciples celebrating the feast of Passover together: “Now as they were eating, Jesus took bread, and after blessing it broke it and gave it to the disciples, and said, ‘Take, eat; this is my body.’ And he took a cup, and when he had given thanks he gave it to them, saying, ‘Drink of it, all of you, for this is my blood of the covenant, which is poured out for many for the forgiveness of sins’” (Matthew 26:26-28).

Passover was the celebration of the events of the Exodus- when God, through Moses, brought His people out of slavery in Egypt. As part of their rescue, God sent a series of plagues on Pharaoh and Egypt, culminating in the death of all the firstborn sons in Egypt. In order for the Israelites not to also lose their firstborn sons, they had to put blood from a lamb over their doorsteps so that the angel of death would ‘pass over’ them and spare their children. By making a covenant in the middle of this feast, Jesus is endowing the feast with new meaning; He is saying that the Exodus is a foreshadowing of His work. He will be the lamb whose blood is slain to rescue God’s people from slavery to sin and from death.

Now, notice something interesting here. Remember that covenants are ‘sovereignly administered,’ that they are initiated and dictated by the more powerful party in the relationship. And, in the Old Testament, every covenant is initiated by God, who either spoke directly to the covenant recipient or spoke through one of His prophets. But, here in Matthew 26, it is a man who is initiating the covenant. Jesus is telling us, one more time if we have ears to hear, that He is God in the flesh, with the power and authority to build relationships between heaven and earth.

Now, a big question that we must answer quickly is: how is the new covenant both different and the same as the old covenant (a term summarizing all of the covenants that came before Christ)? Because the book of Hebrews says that the new covenant is better than the old covenant: “But as it is, Christ has obtained a ministry that is as much more excellent than the old as the covenant he mediates is better, since it is enacted on better promises. For if that first covenant had been faultless, there would have been no occasion to look for a second” (Hebrews 8:6-7).

First, let’s look at how the two covenants are similar. Both are built on the same promises made to Adam, Noah, Abraham, Moses, and David. Both are administered by the same sovereign God who is both holy and loving. Both are only fulfilled by Jesus Christ.

Michael Williams writes, “The new covenant is not, after all, categorically new.  The difference is redemptive-historical. That is to say, it is not a difference between two categorically different religions, or two different sorts of covenant relationship between God and humankind. It is rather a single unfolding covenant story that moves toward greater levels of fulfillment of divine promise.”

In other words, this was God’s plan all along. Throughout the Old Testament, in all the covenants He made, He was progressively revealing Himself and the work that only Jesus Christ could accomplish. And now, the covenant is complete, and we who trust in Christ are given full access to our Sovereign God, to live in perfect relationship for all eternity.